Ever since I made the leap to learn web development so I could offer web development services at my computer repair store, I fell in love with jQuery. It made creating powerful functions simple and easy. I felt like I was cheating with how easy it was. Only later did I learn of the disadvantages and drawbacks of relying too much on jQuery.

If you are a vintage programmer, you might have heard of jQuery. The feature-rich JavaScript library was way too popular back then and was used to simplify HTML DOM manipulation and tree traversal.

The original concept of this library was to simplify event handling, Ajax, and CSS animation. Undoubtedly, the JavaScript library did terrific in the initial years of release and many years following that, but it isn’t relevant much anymore.

JQuery offers numerous benefits, and just like vanilla JavaScript, it is easy to learn. So why did it decline? We will uncover everything you need to know about jQuery, from its history and features to why it isn’t relevant in today’s programming world. So let’s get on with it!

No one enjoys a history lesson more than the history teacher himself. And to keep it short and crisp, you should know that jQuery was developed by John Resig in 2005 and was released to the public a year later at BarCampNYC.

There were two main goals of the library; the first goal of jQuery was to provide an ergonomic API that can be used to manipulate a webpage. This provided coders with an extremely powerful way to select elements.

Whereas the second goal that the library achieved is that it absorbed the differences between browsers, as back then, it was extremely difficult to have codes that worked flawlessly on all browsers.

The lack of standardized code made the developer’s life incredibly hard as they encountered different edge cases and browser behavior. Later on, the library made more sophisticated techniques easy to adopt, techniques like Ajax and animations.

A Brief Timeline of jQuery

When To Use jQuery & When To Avoid

Knowing the right time to use jQuery is extremely crucial. If you are dealing with a project that will grow in complexity, then it is not recommended to use jQuery.

A project can be considered complex when you want to break the UI into different components, and there are better frameworks than jQuery that can help you do that.

Now, if you are wondering if jQuery would be best for small web pages with little to no dynamic content, you might want to reconsider that thought. Thanks to the native APIs, now you can say goodbye to jQuery for small webpages as well.

Now let’s not be hopeless and think that jQuery is entirely useless to use today. There are certain areas where this JavaScript library would work best at. The library provides comprehensive functionality for powering the front end of a website.

Through jQuery documentation, you can skip all the hard work of learning various native APIs or special purpose libraries and start being productive with jQuery instantly.

You can also feel free to use jQuery in websites that are bound to be simple and won’t become much more complicated. You must also avoid bothering native functionalities in such cases, as the code can get wordier than an equivalent jQuery code.

Why Did The Library Decline?

If we talk about recent times, GitHub removed jQuery from their website’s front end, whereas Bootstrap v5 will drop jQuery. There are several reasons why jQuery was destined to fail in this era of coding, but mainly, there are two reasons for the library’s decline, and here we have listed both reasons briefly.

Though this might not be a significant reason for the decline of jQuery, standardization has improved. Now major browser vendors collaborate with the Web Hypertext Application Technology Working Group for web standards.

While the browsers are still different, the vendors now have some common grounds. In the present time, you wouldn’t need jQuery as it can be replaced with more convenient and efficient native code, and the APIs can do the magic for the developers.

Another reason for the decline is that now most browsers have an evergreen update strategy. Through this strategy, they can update themselves and are not tied to operating system updates.

Due to this strategy, users can adopt bug fixes and new functionalities much more quickly; meanwhile, developers don’t have to wait long before making the relevant changes according to the user’s feedback, as now they can use APIs and features without using jQuery.

There Are Newer, More Powerful Frameworks

Another reason for jQuery’s decline is the introduction of new and better frameworks. Some of the most valued frameworks currently available include React, Vue and Angular.

There are two significant advantages of using these frameworks over jQuery. First, they can break a UI into different components, making the development and updating process fast. It also ensures code reusability, making it easier to tackle complex websites.

Secondly, the newer frameworks also promote a declarative paradigm. Through this paradigm, the developer describes what a UI should look like and leaves the rest to the framework. This can’t be achieved with jQuery as the library requires explicit instructions on what to develop.

Overall, jQuery was a real warrior that lasted long in the early programming world. But fortunately, as time went by, things had to become more accessible for a programmer to comprehend. However, the library is still helpful in many different yet creative ways but only for simple web pages that won’t get complex.

If you want a deeper look into the differences between jQuery and JavaScript, check out our article on the topic here.

Is CSS Hard to Learn? (All You Need To Know)

HTML vs. PHP: What’s the difference?

PHPstorm vs. VScode: How do they Compare for Web Development?

What Is The Difference Between A Text Editor And An IDE? 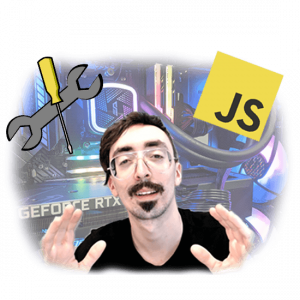